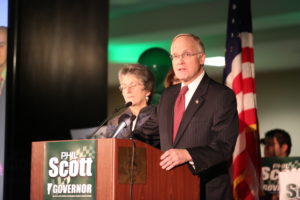 I know what it’s like to serve as Governor through tough times. Back in 2008, when the world faced its most significant financial crisis since the Great Depression, my team and I worked around the clock to respond.

Today, Governor Phil Scott is managing our state through a once-in-a-century public health challenge and the economic fallout it has left in its wake. His strong leadership has helped make Vermont one of the safest states in the nation and we’re fortunate to have his steady hand on the wheel.

On top of everything Phil is dealing with, we’re just a few weeks away from when Vermonters will begin to cast their ballots in the General Election. Phil has been clear that his top priority is doing the job he was elected to do: leading our state — not campaigning. But he needs our help, so I offered to pitch in.

Vermont simply cannot afford a change in leadership right now, and his opponent has been raising money and campaigning throughout the crisis.

We need to make sure Phil has the resources he needs to win this race.

He’s had our backs and now it’s our turn to have his.

Thank you for your consideration. On to victory in November!